Hopi art has evolved over thousands of years and Hopi artists are among the most accomplished in the world.  There are four primary art forms in Hopi:  Pottery, Carving, Basketry/Weaving, and Silversmithing/Jewelry.  The artists have all learned from mentors, usually family members and this tradition of mentoring continues today.  Artists from all villages across the Hopi mesas carve Katsina Dolls but the other art forms are the specialty of particular villages on First, Second, or Third Mesas. 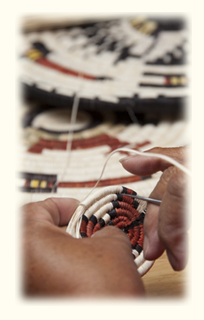 Hopi baskets are derived from techniques that can be traced back to Indians of the Southwest for thousands of years.  Hopi artists produce plaques, bowls, and trays for sale as well as for ceremonial use.  Artists from Third Mesa are known for basketry and weaving. Read more.

These carvings are called "dolls," but they are actually three dimensional representations of the Kachinas who visit the villages for religious and ceremonial reasons.  They are carved from cottonwood root and painted to represent figures from Hopi mythology and have been used for generations to teach the Hopi children about their religion and culture. Read more.

The design and artistic decoration of Hopi pottery has evolved over the centuries and most Hopi pottery comes from artists on First Mesa.  Hopi pottery is made with the “coil and scrape” technique with clay that is hand dug on Hopi land. Surface designs are painted in natural pigments with a yucca leaf brush, and the pots are fired in open pits with sheep dung and cedar as fuel. Read more. 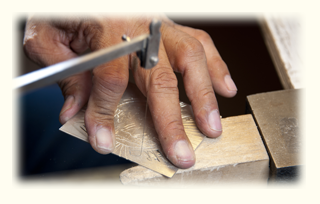 Silverworking was introduced to the Hopi in the late nineteenth century. Sikyatala, from the First Mesa village of Sichomovi, learned the craft from Zuni silversmith Lanyade.  The most widely known silver work is the process of silver overlay which was developed by Hopi artists after World war II.  The artist cuts a design from one flat piece of silver and then fuses that piece to a darker oxidized one that is scored or incised to produce a fine texture. The upper piece is then polished or buffed and the finished pieces of art have a uniquely Hopi character predominantly from Second Mesa. Read more.