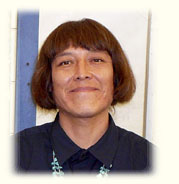 My name is Ahkima Honyumptewa, I am of the snake clan, and from the village of Paagvavi, in Third Mesa. I have been an artist since I was young, having started painting again back in 2006. I’ve been working on paintings on canvas ranging from small to large scale paintings. I do mostly katsinas but want to try different types of genres like landscapes, people, animals, and spiritual influences. Drawing is also a good medium I’ve learned from paintings. Drawing people and their faces is something I wish to learn.

Weaving is something I picked up by accident. Originally wasn’t interested in it until I was talked into it by family & friends in the fall of 2007, learning to weave the pitcuna and kwewa the following year. It wasn’t till the summer of 2009 that I started learning the masupmenkwewa. From then to about 2011, I was pretty steady with my work, extending it internationally. I visited Japan in 2011 & 2012. It was an exciting adventure and I am very honored & humble to have had a chance to go. I also sold art work to friends in France, Germany, Japan, Canada and England.

In the summer 2013, I started to learn the keneldwasha and the aitu. I’ve been learning ever since & still haven’t perfected it. Hopefully by the end of this year I will have learned! Next on my list is blankets & clothing.