Small brightly painted wooden dolls are what come to mind when people hear the word Katsina. These dolls are actually called tithu by the Hopi people. They are referred to as katsintithu when a more specific term is needed. 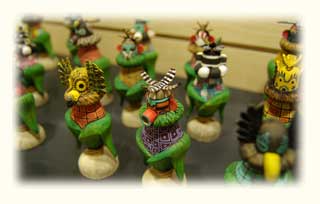 Katsina primarily refers to the supernatural beings who are believed to visit Hopi villagers during half of the year. Katsinas have the power to bring rain, exercise control over the weather, help in many of the everyday activities of the villagers, punish offenders of ceremonial or social laws, and, in general, to function as messengers between the spiritual domain and mortals. Katsinas are spiritual messengers.

The tithu are given to girls and new brides on dance days during which gifts are given by the Katsinas. The children take them home and through them learn what each Katsina looks like. The tithu are used to teach children about the different Hopi Katsinas.

From a Hopi perspective, tithu that are carved by people who are not Hopi are not katsina dolls. A Hopi carver tries to fashion a doll that conforms . . . to the attributes of the Katsina, as taught in religious training. A skilled carver knows the attributes and distinctive characteristics of a particular Katsina and conveys the essence of the Katsina in the carved figure . . . Dolls carved by those not familiar with Hopi religion do not convey the proper feeling and, to Hopis, they look wrong.