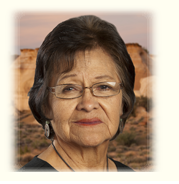 As a child, Frances resided in the village of Shungopavi with her grandparents Glen and Clara Josytewa. She later moved to Flagstaff, Arizona with her parents, William and Rose Quotskuyva, to attend public school. Although her family lived in the city, returning to Hopi during summer months gave Frances the opportunity to know the culture and way of the Hopi life. Today she resides with her husband, John Wester, in the Village of Kykotsmovi.

Frances is a self-taught artist that began by creating miniature Hopi craft items, such as refrigerator magnets and Christmas ornaments. She won 1st place for her ornaments at the Pueblo Grande Art Show in Phoenix, Arizona, and before long she had a clientele of wholesale buyers throughout the United States. She eventually turned her mini item craftsmanship into award winning contemporary art. Her paintings have been featured in books such as “Art of the Hopi” by Lois and Jerry Jacka, and the Children’s Education Discovery Magazine titled “Butterflies and Moths”. Frances has also been filmed in video documents, awarded “Best Native Film” for this program. Most recently, Frances won the 2011 poster award contest for the Heritage Square Hopi Arts and Crafts Market.

Frances has a love for the ancient Awatovi ruins that were discovered in the 1930’s. She says “The art is all around you on Hopi; petroglyphs, jewelry, pottery, baskets, Katsinas and much more. You just have to let your imagination flow, create your own ideas, and convert them onto canvas. The beauty and peacefulness on Hopi gives me the opportunity to put my creativity to work.