Hopi potters draw on a tradition going back centuries. The ancestors of the Hopi made gray utility ware as long ago as A.D. 700. The ancient potters developed black on white styles, black on red, and finally polychromes. In the late '1800s, outsiders began to appreciate the artistry of Hopi potters. This new demand sparked what has been called the revival period for Hopi pottery. 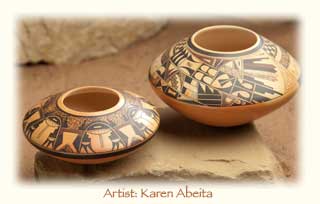 The ancient potters passed their skills on to succeeding generations, many of whom are Hopi potters today. Although First Mesa is the most well-known for its pottery, Hopi potters can be found throughout the Hopi mesas. All authentic Hopi pottery is handmade by the coil and scrape technique. Hopi potters do not use a pottery wheel or make mold-poured pottery. They use the same techniques as their ancestors, hand-painting the designs with yucca leaf brushes and using natural materials provided by their environment. The pots are then fired in open firing areas.

The Hopi call their ancestors, Hisatsinom, "People of Long Ago." The public and most anthropologists refer to these people as the "Anasazi," a word that has become popular in the general literature. Early Hisatsinom are called the Basketmaker people. The Basketmakers were a hunting and gathering people who became increasingly sedentary as their reliance on agriculture increased. As early as A.D. 700, the Basketmaker people began making plain pottery.

Increased corn-based agriculture and increased occupation of multi-roomed pueblo dwellings was accompanied by an increase in the quantity and variety of pottery manufactured by these people. From Pueblo I through early Pueblo III (A.D. 800 to 1300), pottery with black painted designs on white slip was being made everywhere in the Pueblo world. Two of the early black on white styles from the Hopi mesas were Kana-a and Black Mesa. These were followed in the Pueblo II era by Dogoszhi and Sosi. Later styles that were made in early Pueblo III were Flagstaff, Tusayan, and Kayenta. Each has its own distinctive and identifiable design motif.

In the Pueblo III period (about 1300), polychromes first appeared. Pueblo potters began to express a wide variety of colors, design styles, and vessel forms. The culmination of the Hopi polychromes was Sikyatki Polychrome, which flourished from A.D. 1400 to 1600. Later polychrome in the Hopi area included Payupki, Walpi, Polacca, and San Bernardo types. In the late 1800s, outsiders became interested in Hopi pottery, and a revival in pottery production was sparked by the work of Nampeyo and other First Mesa potters. They reproduced the beautiful Sikyatki Polychrome styles and handed down their skills. Most contemporary pottery is made on First Mesa.

Modern Hopi potters make their pottery in the traditional manner. The clay is hand dug on the Hopi mesas and hand processed. The pots are carefully hand constructed using the coil and scrape techniques their ancestors taught them. The paints used are from naturally occuring materials. For example, black paint is made by boiling Beeweed for a long time until it becomes very dark and thick. It is then dried into little cakes which are wrapped in corn husk until ready for use. It is called guaco. 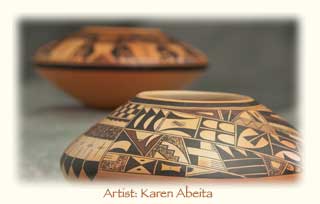 The intricate and beautiful designs are painted free hand using a yucca leaf brush. The pots are then fired in the open air out on the mesa using sheep dung and cedar as a heat source. Prehistoric potters did not have domestic animals to provide dung, but modern potters prefer it for its rapid, even heat.

Some Hopi pottery is ceremonial in nature and not intended for public consumption. You will not find this kind of pottery for sale in reputable galleries and shops. Most prehistoric pottery has been taken from burial contexts, and the Hopi people find non-Hopi ownership of these pots offensive. It is better not to buy prehistoric pottery.