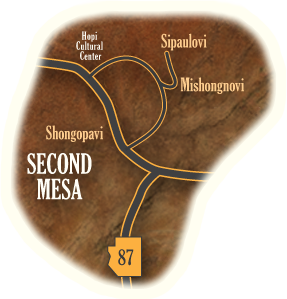 Second Mesa artists are known for intricately coiled baskets and Katsina dolls. There are three villages on Second Mesa: Shungopavi (where most religious and ceremonial activities are centered), Sipaulovi (the last village to be established after the Pueblo Revolt) and Mishongnovi.  Visitor services on Second Mesa include picnic areas, a campground, a restaurant, the Hopi Arts and Crafts Silvercraft Cooperative Guild, the Hopi Cultural Center, and a hotel. Second Mesa has road-side venders where locally made crafts are sold, as well as a number of galleries.