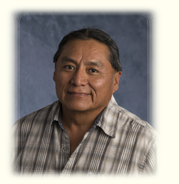 A member of the Coyote Clan, Duane Tawahongva was born at Second Mesa on the Hopi Reservation and lives today in Mishongnovi Village. Duane’s trailer studio sits on the high bluffs of Mishongnovi, with a 100-mile view of the eternal desert valley below, giving him a view all the way to the peaks of the San Francisco Mountains.

Over the last several years, Duane has worked at creating several designs based on Hopi spirituality, designs which are uniquely his own. These designs include his “three generations” and his petroglyph designs which are inspired by Dawa-Ki on ancestral Hopi Lands.

Duane draws his inspiration from the beauty of Hopi Lands and from Hopi spiritual beliefs. Like all Pueblo peoples, his prayers always include prayers for the world and for other peoples before his prayers for the Hopi People and himself. His sincere hope is that his jewelry brings blessings and serenity to all who wear it.

Duane is the recipient of numerous awards including Judge’s Choice at the University of San Diego Show in 2003; Best of Division at the American Indian Art Festival and Market (Dallas, Texas) in 2003; and Best in Division at the Southwest Native American Promotions Show (Fountain Hills, Arizona) in 2002.