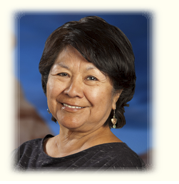 Evelyn grew up at Kykotsmovi, Arizona on the Hopi reservation. She belongs to her mother's clan, Bamboo (Bacavi).  Her father was of the Coyote Clan. Growing up in a large extended family has influenced her craft directly in the form of the images that emerge in stone and clay.

Tribal mythology, Hopi culture and the direct experiences of Hopi life in a time less influenced by modern times is the reserve upon which Evelyn draws for inspiration. "Our home life revolved around women, children and all the work women do." These images in contemporary mediums reveal the underlying commonalities we share as humans. They also convey in art the beauty and dignity inherent in native culture.

“Stone or any material you work with must be treated as a partner in creating. I believe that stone is alive in its own way.  How do I know this? As I work, the stone asserts its will, so to speak, and turns out the way it wants to. I am always surprised when unplanned changes occur.  Am I releasing the intention of the stone, or is it an unconscious thought brought to light? I think it is both.”

Evelyn works in a style known as direct stone carving where no models are constructed. The size, grain, color and shape of a boulder will dictate where to begin. Power tools enable her to carve quickly. In this way, the sculpture maintains emotional freshness and immediacy of thought. Later, after the idea is out, details are added and refined. Stone carving can be physically exhausting but there is a tangible reward to show for this labor. "I believe the 'blood memory' of my ancestors are released throughout this process. Thus, I am connected to the past and present at the same time."

Evelyn began working in bronze in 1999. Initially, the bronzes were cast from stone images, but recently, some have been cast from plaster or clay models. All are limited editions, not to exceed 50 in an edition. Most of Evelyn's bronze sculptures are mounted on a wood base.