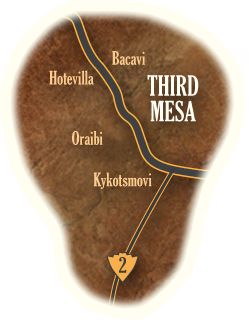 Third Mesa artists are known for wicker and twill basketry as well as Kachina Dolls. There are four villages on Third Mesa: Hotevilla, Bacavi, Oraibi, and Kykotsmovi which is where Hopi tribal offices are located.  Oraibi is the oldest of the Third Mesa villages, one of the original Hopi villages dating back over a thousand years of continuous occupancy.  Moenkopi is also known as a Third Mesa Village but is situated approximately 50 miles west of the other Third Mesa villages at the Western Gateway to Hopi.